Fixing the Faults and it Making it Shiny

The car has come a long way since I got it on wheels back in 2012. The following covers a part of the build process that many people do not document and it is probably the most interesting part of car building; development.

After getting the Locost rolling I had to go back to university and finish my Mechanical Engineering degree, leaving me the odd weekend and my holidays to get the car into a drivable state. The engine had run before but I was struggling to get it to start. In the end this was down to a dead gell battery (don’t let these go below 9V) and after installing a fresh one it was sorted.

Over the winter I had planned on road tuning the engine on private land, but the car sprang an epic oil leak when sat on the drive and was struggled to stay at a constant temperature before that. Since then, its been a never ending process of development.

I had been sold the wrong oil pump gasket and failed to notice this when assembling the engine. The faulty gasket had a larger outlet hole than the pump which I guess this was originally designed for a 1.6 block; as opposed to the 1.3. To be honest, I wasn’t happy using a paper gasket to hold in 70psi of oil anyway, so my brother used his micro mill to cut an o-ring groove into the pump face and we o-ringed the pump; much better! The rest of the pump face was sealed with good-old-trusty Hylomar Universal Blue.

A Lack of Cooling

My temperature issues was solved by installing an extra MOSFET in my Megasquirt ECU for controlling the cooling fan. I had originally used a radiator fan switch, which plugs straight into the rad, but found it to be super unreliable. At least the ECU gives a measurement I can trust (actually you should never trust any measurement from a sensor, ever), so I put that in charge of cooling control. 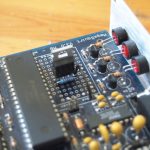 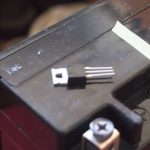 The car was experiencing low oil pressure at once it was up to running temperature. At low temperature it would tick away at 65-70 psi; no problem, but after about 5 minutes of running this would drop down to 10 psi. This was worrying. I was reluctant to tear the engine apart, but I couldn’t see any other option.

I did a lot of internet searching which suggested it could be a lot of terrifying things, including worn out cam bearing surfaces (these are just cut into the head, so it would require a new cylinder head to fix), overheated oil due to bearing failure OR, and this was the one I was hoping for, a highly blocked oil strainer.

Now the oil strainer theory didn’t come from the any suzuki related forums, and it is not a common G13B issue, but I was running a home built sump so it could have been an issue. It turned out that diesel Golf’s tend to cook their oil which over time becomes thick and gloopy, blocking the oil pickup and causing low oil pressure at high temperatures. When the strainer is blocked the hot low viscosity oil flows out of the bearings at almost the same rate that the pump can supply it, giving very little restriction for the pump to fight against; hence no oil pressure.

I thought it was unlikely that this was my issue but it was worth a look. I could pull the sump off without pulling the engine, so it was relatively low effort.

Lots of silicone sump gasket obscuring the oil pickup. This had caused enough back pressure to force the protective mesh onto the pickup, reducing the inlet area. This was an easy fix and I am far less liberal with gasket-in-a-tube these days!

The moral of this story is simple: build engines meticulously, cleanly and with a keen eye. If it looks like it’s going to fail, it will fail. Although I had made some big mistakes I had been cautious and that had ultimately saved the engine.

Although I had made some big mistakes I had been cautious and that had saved the engine. If at any point I had decided to just do donuts and carefully check each system of the car I would have likely destroyed an engine; better to take your time then waste your time.

So by Easter 2013 I finally had a car that would sit and idle, not overheat and would hold good oil pressure. It took its maiden voyage up and down the driveway.

So by Easter 2013 I had a car that would sit and idle, not overheat, and would hold good oil pressure. It took its maiden voyage up and down the driveway and I was happy with the world; but I wanted more.

Ever since I had heard about the Isle of Wight Motor Club and their Autosolo/Autotesting I knew I wanted to get involved, and more importantly I wanted to use the Locost to compete. With an event going on in the middle of the holiday I made a big push to get the car ready for this. The engine still drove fairly poorly and needed the fueling dialed in before I could drive it in anger. We took the car out for some closed loop tuning and got to grips with how to tune Megasquirt.

At this point in time the car was sporting a chalk-board-black nosecone, as it had been damaged and I needed to make another one. It actually looked pretty cool in this guise. 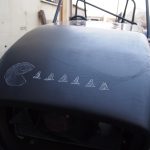 To put a long story short, it wasn’t very successful! The wideband sensor (An Innovate LC-1) was causing all manner of issues. It would drop in and out, the value would drift, and ultimately I couldn’t dial the fuel in because the reading simply couldn’t be trusted. I was also fairly inexperienced with tuning Megasquirt and especially tuning a car on throttle bodies. I was using MAP (Manifold Air Pressure) against RPM, which was great for bumping the car around the drive but gave very little resolution at anything over 15% throttle displacement and gave poor consistency.

In the end I left the car at home without doing any racing. I took my laptop back with me to university so I could look over the engine logs.

Once I had finished my degree I had three weeks spare before starting my first proper job in industry and leaving home. Following all my poor experiences with the Innovate LC1 I opted to switch to a different wideband controller.

After a lot of research I settled on an AEM UEGO. It seemed like a lot of people had had positive experience with them and the controller itself was built into a nice 50mm gauge; giving visual feedback on what the engine was up to. This turned out to be one of those rare occasions where paying money to fix a problem actually fixed the problem! The AEM is a great piece of kit and has been 100% reliable since it was installed in 2013. I even run one of these in my daily driver and have never had issues with it. 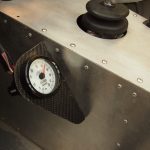 The gauge was mounted to the tunnel because it was planned to be only temporary, however it’s likely it will be moved to the dashboard for permanent installation (I’m writing this in mid 2018…).

I also upgraded the throttle cable assembly to use a custom aluminium rocker on the firewall. Originally the throttle pulled on the cable directly, but this was never very linear. This is one of those little corners which isn’t worth cutting. 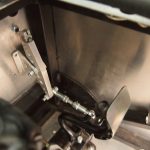 Bodywork
On what spare weekends I had I would travel back home to work on the car, and really wanted to nail the bodywork so it looked more complete. This was a project I was desperate to get out of the way while the car still lived at my parents house and my Dad could teach me the required skills.
During this time we also made a replacement nose cone out of carbon fibre, to go with the bonnet. Given the amount of work that went into producing this I opted to leave a big circle of carbon showing on the nose. I sometimes use this for displaying numbers. 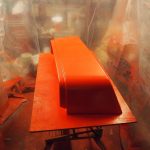 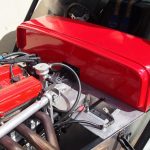 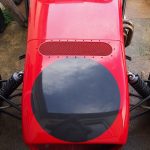 Originally the car was going to be Jaguar Racing Green, but I switched to Audi Absolute Red at the last minute. I think it looks great! 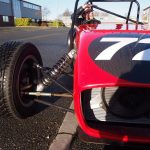