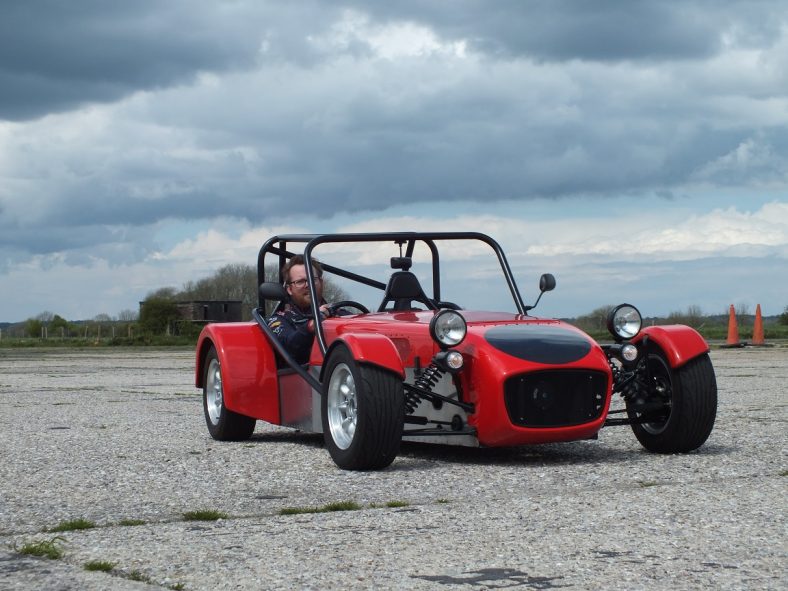 I get super nervous when it comes to things like this, logistics and towing always freaks me out. Getting the car to and from an airfield… on time… on a trailer… with all my tools and spares… there is plenty that can go wrong. Fortunately barely anything went wrong!

Prior to IVA I need a reasonable fuel map in the car so it can be driven around, undertake the emissions tested, test the speedo etc. I have changed so much in and around the engine that I needed to start from scratch this time around. Following lessons I had learnt running DIY fuel injection in my daily Sierra, I knew the benefits of using throttle position as the ECU load input, this is known as alpha-n tuning and is what I will be running in the Locost from now onwards as opposed to the blended tps/map setup I had been using before.

In short, I needed somewhere to drive and map the car. It had to be private land and with plenty of space to be able to drive at wide open throttle for long periods of time. After a visit to my local airfield, and a phone call with the very generous land owner, I was ready to go.

I made a big push to get the car into a ready state for the day, finishing with a pre-IVA job list of about six items. If all went well, I would be in a comfortable place to put in my paper work afterwards. Spoiler: my job list is now much bigger!

I barely slept the Sunday night before Mondays testing and after making sure everything was loaded correctly I arrived 15 minutes early at 9:45am.

Fortunately, my nerves amounted to nothing. The drive was a cool 1 hour 15 minutes with no hassles and very little traffic. Within half an hour of getting there my brothers Alex and Neil arrived to help me out, having driven for hours to get to the airfield. I love it when a plan comes together.

The first job of the day was to build confidence in the engine, shake down all of the many new components on the car and get some of the cruising fuel table positions filled in. Alex took to the drivers seat while I plugged in the laptop and watched the ECU do its thing and auto-tune the low speed elements of the table.

I did scoot the car around a little bit before everyone arrived and I could already tell it was driving better than it ever has, at least from a handling perspective. Over the winter I was very specific about the alignment I applied and made sure it was dead straight. The limited slip differential has also completely changed the feel of the car.

After an hour or so of driving, and lots of stopping and checking for leaks, we started to build up the engine speed and mapping the wide open throttle (WOT) parts of the fuel table.

First 3000rpm, then 4000rpm, then 5000rpm and soon 6000rpm. The engine sounded loose and happy, free revving to whatever we threw at it. The auto-tune feature of Tuner Studio was pulling fuel out every thousand RPM we went up, suggesting my initial guess was too rich, exactly as I had planned.

Things weren’t entirely without incident and a number of issues became apparent at this point:

We decided to take note of the issues but simply crack on. Its not often you get access to an airfield for the day and we wanted to get the most out of it.

I had a three point job list that I had to get done at the airfield:

The first two were not a problem at all, but the third required a bit of thought. The speedo appeared to not be working at all, at least with the calibration I had put in at the beginning of the day. Based on my early maths, with a 4.3 ratio differential, and four bolts on the prop-shaft flange to read from, the gauge should have been seeing approximately 15000 pulses in a mile and that’s a what I set it to.

Given that this number was clearly wrong I adjusted the pulses per mile to 1000 and took the car out for a short drive, while referencing the GPS speed on my phone.

My initial guess was super far off! How did I mess that up? Anyway, it was reading low, so by reducing the number of pulses per mile we could increase the speed seen on the gauge.

I did however want to back calculate my maths, which I will do here:

So yeah, the maths doesn’t add up and I don’t trust the gauge manufacturers instructions… but it works!

In fact, lets do some maths in the other direction…

Now this kind of looks like the number we came up with in the end… can you see it?

Now the gauge manufacturers documentation describes this number as the “frequency”, so the factor of four kind of makes sense, maybe, and the factor of 100 could just be for the sake of storage or to give resolution for certain gearboxes.

Driving on my own

Even though the engine was blowing a fair bit of smoke on up shifts we decided to get some miles on the piston rings and shake the car down further. Issues aside, it felt fantastic. Getting from a stand still to 70mph happens pretty damn quickly and the steering feel was better than it ever had been.

At the far end of the air strip was a number of coned gates setup for truck driving tests and I couldn’t help but have a little play in-between them. No complaints regarding the chassis.

Evolution of the Fuel Table

Below is the Volumetric Efficiency (VE) table we started the day with, the table we ended the day with and the difference table showing the changes made. The VE is simply a measure of how much fuel flow the ECU is demanding relative to the amount required to achieve stochiometric mixture at wide open throttle. Technically, if the engine is 100% efficient as an air pump, it would achieve 100% VE across the top of the table.

As you can see, the fuel table isn’t perfect, especially at high rpm and part throttle where it was barely touched. Its quite difficult to consistently drive this area of the table! I also did a substantial amount of manual adjustment based on what the wide open throttle numbers suggested. I could smooth it over more but I am going to leave it for now.

Notice that at low RPM the engine needs more fuel for lower throttle angles. This makes a lot of sense, as the throttle plates don’t act as much of a restriction at low flow rates, but as the flow increases at higher RPM’s they do a better job of restricting flow into the engine.

This map will do for the IVA, then I will take the little red car to the dyno.

I am really glad we got this day to shakedown the car. Its highlighted a few jobs that really need to be done before submitting my paperwork and its better to get them done now rather than later.

The engine is still a bit of a worry but my gut feeling is the valve guides have worn out. Prior to rebuilding the engine it had started doing the same thing and I had assumed it was the piston rings. The engine has fresh stem seals, so it points to the guides themselves. I have a spare cylinder head in great condition that I am going to drop in.

The chassis feels great and it was nice to have someone else drive it for a change. I’m looking forward to getting on the road later this year.