Fabrication: That time I made an Exhaust Manifold

I’m going to try to document a few of my older projects that fell through the cracks and didn’t make it on to here. Hopefully you’ll find these little articles both interesting and informative… and there are pictures!

A couple of years ago I made an exhaust manifold for a friends Seven. Having seen the stainless manifold on my Locost he wanted one in the same “over the chassis” style. The manifold on my Seven was/is OK, it does the job, but its not my best piece of work; I was learning along the way. The Locost itself is a testament to my abilities at each stage of its build; some parts are better than others due to improving my fabrication skills as I went along. 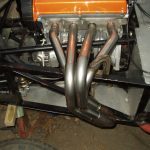 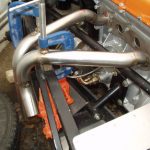 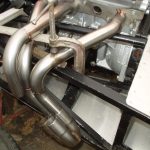 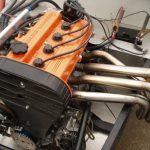 This second exhaust manifold project benefited from everything I had learn’t and was properly jigged and built close enough to equal length. I built it from separate bends of 316 Stainless Steel with 3/4inch headers and a 2 a inch collector. The primary lengths were specified based on the expanded volume of a single cylinder cylinder, going from atmospheric temperature to an exhaust combustion temperature I found on the internet (I have never measured exhaust gas temperatures before, so I think I can be forgiven for consulting the web).

From what I heard it did well on the dyno, and in truth I was sad to see it go; it took a lot of time and effort to make. Eventually the Locost will get one of the same quality, if not better. 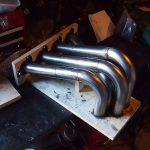 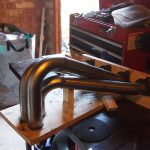 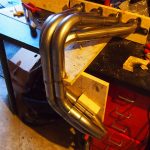 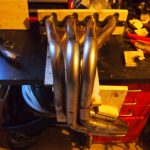