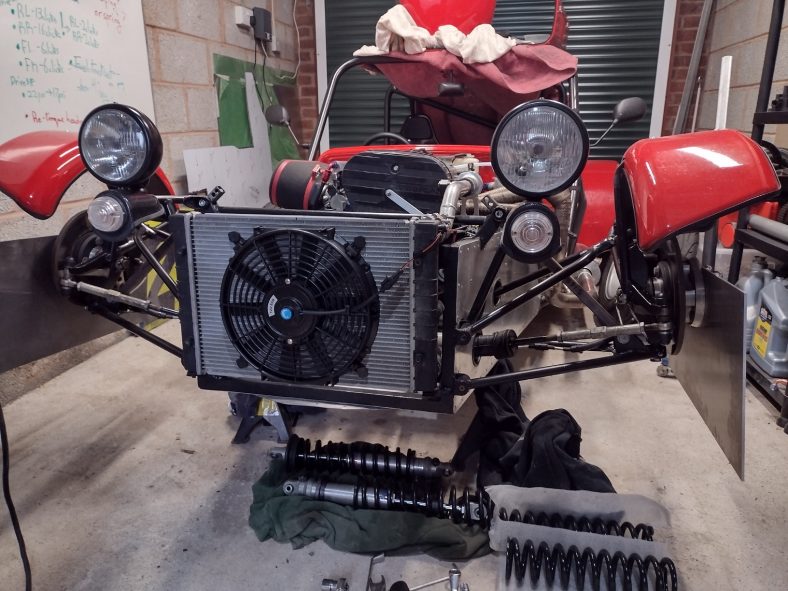 I have been really looking forward to this phase of Locost ownership: the development! With the car on the road I can now make changes and feel the difference in the engine and the handling almost straightaway. Back in my previous job I used to do this in a high tech racecar simulator, but I felt the real learning would always be on the road in my own car. Here goes!

I have put approximately 100 miles on the Locost since it first hit the road. These have been spirited drives to get to know the handling and deal with any reliability issues, as well as a few commutes to work. In short: I have been dodging winter showers.

The car has been really struggling with poor straight-line stability. Once its in a corner it feel “okay” but in a straight-line it would dart in and out of bumps, and generally wonder across the road, even though I was holding the steering dead straight. This has been really hindering my enjoyment and generally slowing me down. I can’t push the car without holding on to the steering wheel for dear life, which doesn’t seem entirely right!

With this in mind I put the car up on axle stands and reviewed the setup.

For the first time in pretty much ever I am going to put my cards on the table and show you my setup. If for any reason you decide to use these numbers, you can do so at your own risk.

So there you have it, all my numbers for the world to see. But which of these could be causing my instability issues? Well three of them stood out to me as potential causes for concern: the front castor, the front toe-in and the roll stiffness distribution.

So what does Castor do and why should we care? Here is a picture I stole from suspensionsecrets.co.uk. Some of their written text is a bit dodgy but their pictures are great!

Castor is the angle from vertical made by your upper and lower ball joints, as viewed from the side of the car. Increasing this angle moves the steered axis further forward of the centre of the tyre contact patch on the road, which is approximately where the lateral and longitudinal force is applied; this measurement is known as the “trail”. This causes the steering effort to increase for a given amount of load on the tyre, and the self centring moment to increase.

Why would that help my issue? Well I have straight-line stability problems and increasing the self centring moment means the whole upright assembly, and steering is less prone to wander in response to external steering inputs, like pot holes and bumps. It wants to go in a straight line.

From my experience working with small lightweight single seaters, albeit virtual ones, I know that 4.6deg front castor is very low for this weight of car. I remember Formula 4 cars running in the region of 7 to 10 degrees. In fact the weight on the front axle is very important when picking a castor angle, the lighter the car the more castor you have to run for a comfortable steering load.

I actually reduced the castor down to 4.6deg back in the summer of 2020, and for good reason. I have been running in the region of 7deg for a long time and was happy with the steering feel but I was really concerned about the additional negative and positive camber it induced at high steering angles.

If you look at the following pictures you can see the masses of inside wheel positive camber at medium to high steering angles. With the amount of camber gain that my suspension has its actually quite difficult to control camber, especially when the car pitch’s forward and backward.

But as you might have guessed, I have reluctantly put the castor back into the car as the steering lacks self centring and ultimately stability; its all a balancing act.

“How do you adjust the castor on your car?” I hear you ask? Well its really easy. The upper wishbone can slide backwards and is held in place by shims. This moves the upper balljoint backwards and increases the castor. It should be clear in the picture below:

Eventually I plan on changing the front suspension geometry to be a bit more of a compromise between pitch and roll, taking into account additional camber induced by castor.

Having increased the castor back up to 7deg I rechecked the bump steer and it was very very high; my notebook says +3mm toe out over 64mm of axle bump. I had to shim the outer tie-rods downward by about 10mm to remove any bump steer.

This was likely the source of a major handling issues I had back in the day while doing autosolo. In fact, the car was very unstable over bumps and would wiggle around when rolling into a corner; the following video kind of shows that.

I’m glad to have dialled this out. I have learnt an important lesson over the years: You can build a beautiful looking well engineered car but if it isn’t setup properly it’ll be dead slow.

With the virtual “Formula” cars they always tended to run some amount of front toe-out and rear toe-in. This made them very nimble and they would turn-in to corners easily. If you visualise it from above, it can be seen as the front inside wheel already turning into the corner.

Here is another picture stolen from the internet to help you:

I decided to give toe-out a go back in the summer of 2020, mostly in response to the weird handling I had on turn-in, which was most likely due to excessive bump steer!

Given my stability problems, nimbleness was the last thing I needed, so I reverted back to a small amount of toe-in. I went from 2mm of toe-out, 1mm a wheel, over 300mm width, to 1mm of toe-in, 0.5mm a wheel. With the Ackerman steering geometry in the car this toe-in will quickly disappear with additional steering angle, but in a straight-line it just numbs the steering inputs.

“But how do you measure toe-in Josh?”, I’m glad you asked. With the car on axle stands, and pins in place of the dampers (putting the car in its “design condition”) I take the boots off of the steering rack and place 3d printed shims to lock the rack central; see the pictures below. I then attach “toe plates”, something of my own creation, onto the wheels and use a tape measure to measure across the axle. Adjustments to the wheel angle are made via the track rods. I also ensure the wheels are both running straight relative to the chassis and generally square everything up.

The same method works for the rear.

Roll Stiffness Distribution is something that is often ignored or poorly understood by weekend warriors such as myself but it is a core handling characteristic of a car, or should I say balance characteristic. In fact in F1 it was generally known as the “mechanical balance”, as opposed to “aero balance” or “weight distribution”. Its mechanically controlled.

My little Locost has no anti-roll bars so this is purely governed by spring stiffnesses and geometry; we’ll ignore roll centers for now, my front and rear roll centers are at approximately the same height.

I’m not going to dig deep into the whys and wherefores of how weight transfer works, that is not what this blog is about, but it would help if you agreed with the following things:

All make sense? Great! If not, I strongly suggest reading a book like Tune to Win by Carrol Smith. There are loads of really readable references out there.

The final statement I am going to introduce covers an element of the system that I think is generally missed by most. It was somewhat of a “eureka!” moment for me when it was first introduced:

Given all of the above it would make sense that the further an axle is from the center of mass the less force it should produce, or grip, to keep the car in balance. This is the balancing of the front and rear turning moments.

Its not too big of a leap in logic to realise that if your weight distribution is towards the rear (say ~45% of the weight on the front axle) then your front roll stiffness should be higher than your rear and not ~45% of the total like my little Locost.

Well, that is kind of useless as we don’t have a solid axle with perfectly vertical springs attached to it, but we can turn the Locosts suspension into an equivalent axle by calculating the spring equivalent stiffness’s at the ground. We do this by using the motion ratio between the damper and the contact patch of the tyre. The maths is as follows:

I’ll reiterate the numbers from the table above:

As explained, the front is softer in roll than the rear. How did I solve this? I increased the front spring rate from 200 lbs/in to 275 lbs/in, giving the following:

That is a whooping big change in Roll Stiffness Distribution, 7.52%! In the simulator I would usually aim for steps of 4% as these were usually noticeable, but I’m not messing about with the Locost. It was hideous to drive at speed and I wanted to feel confident in the car and enjoy it.

The changes listed above amount to following setup differences:

After all of the above it was time for the fun bit: driving! So how does it feel?

But what does all of the above actually mean? It means the car is finally fun to drive! I went out for a good long session on a sunny sunday afternoon and people were waving me by and giving me the thumbs up. I managed to catch up with a group of Porsche owners out for a pleasant drive and give them a bit of a wake up with my bright red loud viper of a car. It was awesome.